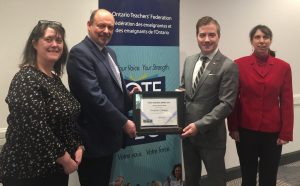 For over 70 years, the Greer Award has annually recognized an individual or organization for outstanding contributions to publicly funded education in Ontario. We have had many outstanding and deserving recipients and this year is certainly no exception.

OTF and the Affiliates were proud to present the Greer Award to Frontier College, our partner in the promotion of literacy for many years.

Frontier College, founded in 1899, is Canada’s oldest and most respected literacy organization. The organization recruits and trains volunteers to deliver literacy programs to children, youth, and adults in communities across the country.

In 2005, Frontier College launched the Lieutenant Governor’s Indigenous Summer Literacy Camp program in Ontario, a pilot partnership between the former Lieutenant Governor, the Honourable James Bartleman and five fly-in First Nations in northern Ontario. To date, more than 50,000 children and youth have attended.

Over the years, OTF and the Affiliates have had the honour of supporting the summer camps and hearing firsthand of the success of the camps. By the numbers, last year, the camps reached nearly 2,700 children in 24 communities in Ontario and over 7,500 young people in 127 communities across Canada. And, for the first time, more than half of the camp counsellors were hired from within host communities.

As stated in the nomination by OECTA, “Especially in the wake of the Truth and Reconciliation Commission, it is crucial that we recognize and support the efforts of organizations that are striving to promote Indigenous perspectives and bridge the education gap between Indigenous and nonindigenous students. It is telling that the Indigenous communities themselves are consistently receptive to Frontier College’s involvement, positive about the contributions made by counsellors and staff, and excited to have the camps return the following summer.”

For its longstanding commitment to boosting literacy and engagement in Indigenous communities, and its significant support for public education, Frontier College is a most deserving recipient of the 2018 Greer Memorial Award.