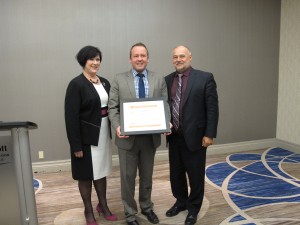 On Friday, April 8 at the Spring Board of Governors meeting, Francine LeBlanc-Lebel, OTF President and Paul Elliott, OSSTF President presented the Greer Award for outstanding contributions to publicly funded education in Ontario to Taylor Gunn, President of CIVIX.

In 2002, Taylor and Lindsay Mazzucco had a vision – a strong and inclusive Canada where all young people are ready, willing and able to contribute to their country. They believed that, if students had the opportunity to practice voting, they would begin to understand the significance of voting and continue the practice as adults. Student Vote was born.

The success of Student Vote cannot be disputed. Since 2003, 29 programs have been conducted across Canada in federal, provincial, territorial and municipal elections. In total, these programs have reached over 10,000 schools and 3 million students.

CIVIX, which focuses on building the skills and habits of citizenship among young Canadians, was born through a merger between Operation Dialogue and Student Vote in 2013. Because citizenship means more than casting a ballot, CIVIX has several programs for engaging students between elections.

For example, the Student Budget Consultation provides students with an opportunity to learn about the government’s revenues and expenditures, talk about important political issues and offer insights on the upcoming budget.

Rep Day is a nationwide initiative that connects elected representatives with high school students to encourage dialogue on current political issues. And, by the way, CIVIX is currently scheduling Rep Days for the 2015-2016 school year, if you are interested.

Democracy Bootcamp is a professional learning conference to support teachers in delivering the Student Vote program.

OTF and the Affiliates have supported Taylor Gunn and Student Vote since the beginning. We have recognized the importance of engaging students in the democratic process.

Taylor exemplifies the characteristics of an engaged citizen of boundless energy combined with his undying regard for democracy and passionate belief in the children and youth of our province and our country.

OSSTF stated in Taylor’s nomination that he “is one of those rare individuals who has seen a need of students and has applied himself creatively to fulfill that need. By engaging youth in democratic processes, Taylor has shepherded a generation of young citizens who are knowledgeable and eager to vote. His brilliant vision is matched only by his enthusiasm and industry. To create and maintain such a valuable organization that effectively engages our youth is certainly deserving of recognition.”

The Greer Award was established in 1947 in memory of Dr. V.K. Greer, a distinguished Ontario educator. Because of the high regard for Dr. Greer, his colleagues established a fund as a memorial to the man and his contributions to public education. The award is presented annually for outstanding contributions to publicly funded education in Ontario. OTF administers the Greer Award.