OTF thanks the educators in our schools for ensuring that our students receive the highest quality education. Ontario education is acknowledged as one of the best in the world. In light of the current climate in Ontario, teachers continue to go beyond the limit in preparing our students to be productive and caring members of our society.

Teachers and what’s happening in our schools is the subject of many news stories. OTF will post some of these stories to share the good news but also highlight some of the effects of the cuts. This is not intended to cover all the news stories.

The Economic Case for Investing in Education, 2019 Conference Board of Canada Report, June 2019 – This report was prepared by the Conference Board of Canada for the Ontario Secondary School Teachers’ Federation. A quote from the conclusion of the report: Our findings suggest that changes in public education spending have a significant impact on the province’s economic performance, including an estimated total increase in Ontario’s economic activity of $371 million from a 1 per cent increase in public education spending. 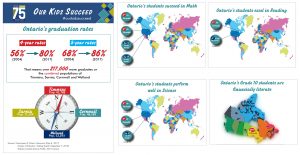