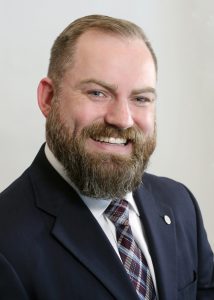 Nathan Core is the 79th President of the Ontario Teachers’
Federation (OTF).

Nathan received his Bachelor of Education from the University of Windsor in 2007. He taught internationally before obtaining a position with the Waterloo Region District School Board in 2010 as an occasional teacher. His assignments have included Grades 1 through 8 as well as specialty positions in intermediate math, science, physical education, music and special education resource.

Nathan was elected president of the Waterloo Region Occasional Teachers’ Local in 2013 and was the recipient of the 2015 ETFO New Member Award.

At the provincial level, Nathan was a member of the Regulation 274 Provincial Task Force, and a member of both the Canadian Labour Congress and the Ontario Federation of Labour’s credentials committees. Since 2017, he has been a member of the OTF Board of Governors.

Committed to the labour movement, he is a delegate to the Waterloo Region Labour Council and a proud supporter of the United Way.