Below are links to three documents which govern OTF’s operations: About OTF and its Affiliates, the Bylaws of the Ontario Teachers’ Federation and the Teaching Profession Act. 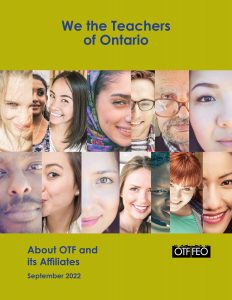 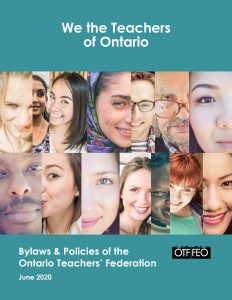 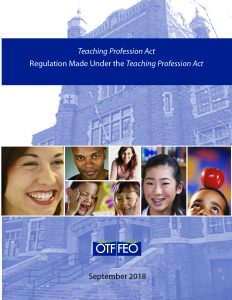 OTF’s primary role is advocating for the teaching profession, for its member teachers and for publicly funded education. It is OTF’s statutory duty to work explicitly and implicitly in the interest of the province’s teachers. Unlike the Affiliates, OTF does not engage in collective bargaining. However, OTF does take positions to support teachers’ ability to offer the best professional service and speaks out on issues of general education policy.

OTF is the Partner (or Sponsor) along with the Government of Ontario in the Ontario Teachers’ Pension Plan; it is charged with representing the interests of all teacher pension plan members—active and retired.

OTF offers a variety of services and supports to members such as numerous professional learning programs. OTF advocacy extends to interaction with other educational stakeholder groups and partners.

The OTF fee is included in the tax deductible dues a teacher pays to his/her federation. For each full time equivalent teacher, the four Affiliates remit an annual fee of $30.40 to OTF. Unemployed teachers do not pay fees. The core work of OTF is supported entirely by these fees, which are approved annually by the Board of Governors.

Standing committees, named in the Regulation under the Teaching Profession Act, always include one representative from each affiliate. The Board of Governors and the Executive create other special committees from time to time as the work of the Federation requires.

OTF is an affiliate member of the Canadian Teachers’ Federation (CTF) and sends representatives to national, international and provincial educational conferences. 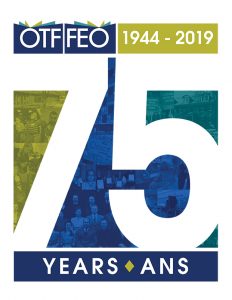 Live and Learn: OTF/FEO is celebrating its 75th anniversary in 2019. This video, Live and Learn, focuses on five important aspects of OTF/FEO: Remember your roots, Plan for the future, Fight for your rights, Change for the better, and Play well with others. Watch the video here.

The video has five parts. Just click on the part you wish to watch.

Plan for the future

Fight for your rights

Change for the better

Play well with others