iPads are being eagerly purchased for school use yet there is very little practical knowledge about how they can be integrated in a meaningful way. In an elementary context they are currently being used to “substitute” or “augment” more traditional teaching and learning models. We would like to inquire into how they can be used to not only enhance the traditional classroom model but also “transform” it and move beyond the geographic limits of our schools. We plan to use the SAMR (Substitution Augmentation Modification Redefinition) model developed by Dr. Ruben Puentedura as the basis of our program development. Our aim is develop learning opportunities for students (Primary and Junior) which will enable them to use the technology to create evidence of their learning in various formats using the iPad. Just as we use Bloom’s Taxonomy to direct students’ thinking, we would like to use the SAMR model as the paradigm for enhancing student use of technology. Our other aim is to provide professional growth for our colleagues in the area of technology integration.

Our professional goal would be to increase the level of student engagement in learning through the use of technology, specifically the iPad mini. Currently technology often acts as a direct tool substitute (e.g. doing research on-line) in classrooms. We would like to see a shift from using iPads for tasks that can be done without the use of technology to ones that promote collaboration and more authentic learning. We are using the SAMR model the help us integrate technology in our teaching and student learning.

It was very easy to find ways to use the Ipads as a form of substitution in the SAMR model, as opposed to augmentation or substitution. Although students seemed more engaged in the guided reading lessons when using EPIC, the lesson could have easily been done with physical books.

Wifi was not always reliable.  Sometimes students had to wait 5 minutes or longer for the log-in process to work.  Other times they could not connect at all.

Some  purchased apps were more expensive than we had planned and some of the free apps had limitations.

In general the logistics of purchasing and setting up the iPads was a lot more time consuming than expected. We were delayed somewhat in starting our project as we waited for the iPads, cases and the cart to arrive. Our board has guidelines around iPad setup and app purchasing which make the process generally slower.

Student engagement has increased dramatically since the iPads were introduced. Reluctant writers seem to have responded most positively to using iPads. An app such as Dragon  has allowed student who struggle with writing conventions and fine motor skills to capture their ideas in writing. Minecraft has motivated students to plan out their creations in writing and duplicate them using the app.

Students were able to take the iPads into the community to document their learning.  They used their own photos and videos taken during this outing  and the Thinglink app to create public service announcements about protecting local habitats.  All of the resources and tools they needed to create their projects were accessible through the iPad — no need to download and upload files from other sources.

Students, as native citizens of the world of technology, were extremely comfortable using the iPads and would often direct their own learning, discovering aspects of the apps yet to be explored by the teachers.

Our school hosted three iPad workshops for staff in our family of schools this year.  They were led by the board’s IT Instructional Leader, who introduced us to some of the apps we used.  At the final workshop at the beginning of April, we shared our learning and our projects with staff from other schools.  We were also inspired by some of the activities they conducted with their own classes.

Our school’s final inquiry cycle had a focus on technology.  Within our divisional teams, we shared some of the apps we have been using and described some of our projects.  Some other staff members then wanted to either do a similar project with their own classes or try out some of these apps for themselves.

All projects led by the teacher-librarian were done in partnership with other staff members.

We are planning to share our projects and findings at our next staff meeting.

Our goal was to find meaningful ways to use iPads in our classrooms. Given the limited timeline we were not able to reach all of our goals but we were pleased with what we were able to accomplish. We are planning to further our research in the next school year, as it has now become a part of our regular practice. Students will also start to play a more integral part in deciding which iPad apps and functions they will use to learn and to demonstrate this learning. This year they were introduced to many apps and tools, now it is their turn to refine their use.

We would also like to continue our discussion on and use of the SAMR model. Some of us felt it was a hierarchical model that encouraged redefinition, whereas other disagreed and thoughtsubstitution was still a valid use of technology.

These resources will open in your browser in a new tab, or be downloaded to your computer. 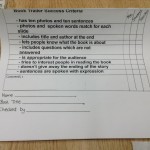 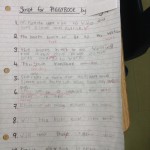 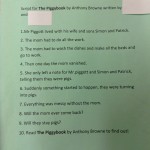 Minecraft library built by gr.1 student based on her writing. 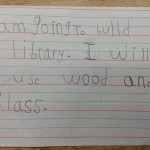